How to Cast and Stream Karaoke Apps on Google TV 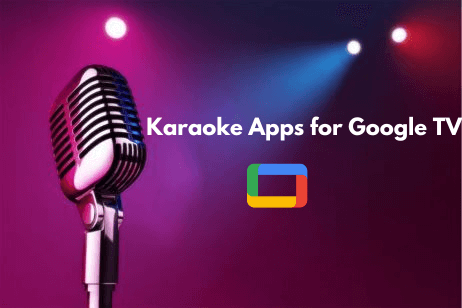 You shall let out your singing talent by choosing the best Karaoke apps on Google TV. As you might know, karaoke apps help you improve your singing skills as well as entertain you. The apps play the background scores for you, allowing you to record the vocals. You can view the lyrics on the screen, use a microphone or headphones for detailed notes, and record your vocals. Moreover, it rates your song with scores or grades and ranks your cover. Finally, you can share it with a community, including your followers, who can like and comment on your tracks. If you want to know the best Karaoke apps to use on Google TV, the below section covers the details.

We have no karaoke apps available for Google TV. Until some apps get official support, you shall cast karaoke apps from your smartphones and sing along on Google TV.

Smule is on of the best karaoke apps available for both Android and iOS devices. It lets you record vocals in better quality. The app has over 10 million background scores of songs in different languages. The songs can be accessed under different categories so that you can find them easier. You can go solo and join a duet with other users or join a group of users on Smule. The app doesn’t have a cast icon, and you need to use the Google Home app to cast it.

Karaoke Time is yet another popular karaoke app for Android devices. Like Smule, it has a huge library of songs for you to sing. The songs are under different genres, and finding songs is made easier. Unlike Smule, Karaoke Time has a built-in cast option, and you can Chromecast to Google TV.

Starmaker is another popular karaoke app with millions of songs. There are a lot of users on Starmaker. The app lets you make a lot of friends and join communities. You can sing and upload songs in any language and share them with others on the platform. Furthermore, the app lets you like, gift, and comment on other’s covers and chat with others either in chat groups or personally.

We have discussed some apps that can be used for singing karaoke on Chromecast with Google TV. Some of the useful karaoke apps include Karaoke, Karaoke Lite, and KaraTube.

Before starting the Chromecast, choose your favorite Karaoke app. Download, install and log in to the respective app on your Android or iOS device.

Ensure you have these ready

[1] Firstly, launch the Karaoke app on your iOS or Android phone.

[3] Now, a list of available devices comes on screen. Choose your Chromecast from Google TV device from the same.

[4] Next, ensure that the connection is made. The cast icon might change its color upon casting.

[5] Later, when you need to stop casting, tap again on the cast icon.

[6] Search and play the songs on the app and view it on TV.

[1] Firstly, launch the Google Home app on your smartphone.

[2] Tap on your Chromecast device to which you want to cast.

[3] Click on Cast my screen icon and then on the Cast icon.

[5] Finally, open the karaoke app on your phone, and you can stream on Google TV.

[6] If you need to stop casting, click on the Stop mirroring icon.

So, we have discussed different Karaoke apps and ways to cast them on TV. You can cast the Karaoke Time app through Chromecast, while most others are cast through the Google Home app.

2. Is there a karaoke app for Smart TVs?

There aren’t many karaoke apps for Smart TVs. However, you can Chromecast karaoke apps on Smart TVs if you have its app on your smartphones.