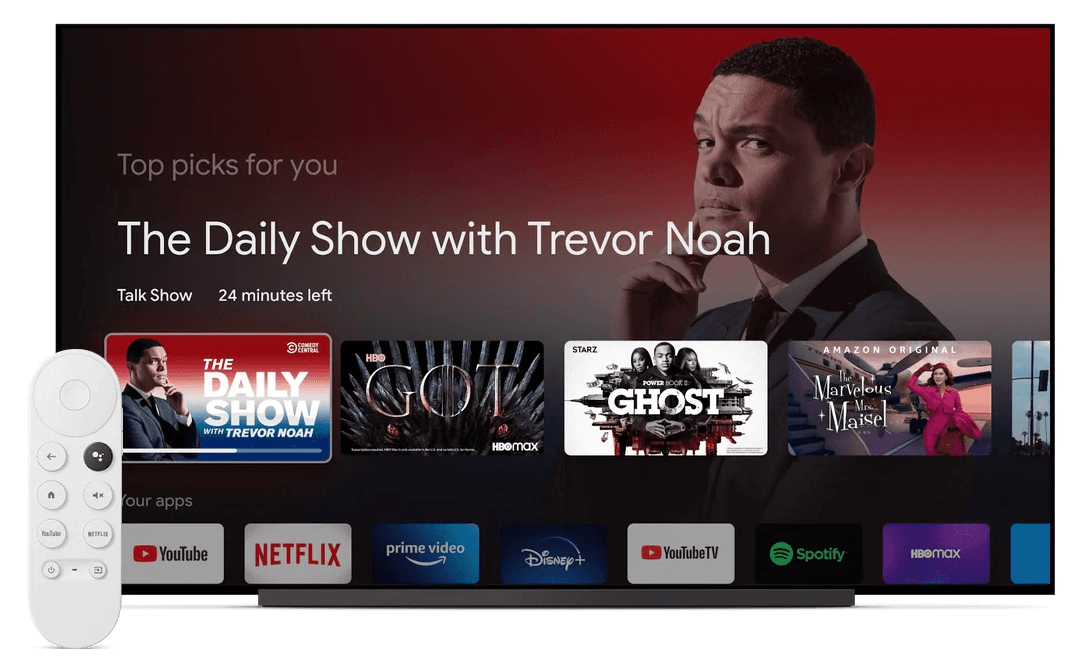 List of Best Apps for Chromecast with Google TV

Guide: How to Setup Chromecast with Google TV

Netflix is the go-to app for all our streaming needs. In this year, Netflix announced a lot of new movies and series. One of them is starred by Leonardo DiCaprio. Though Google TV is a new device, Netflix has its own app for Google TV. With that, you can stream all the video titles with ease. Based on your preferences, Netflix will be pre-installed on your Google TV. If not, you can install the app from the Play Store. You can also cast the Netflix app from your smartphone too.

Everyone is talking about HBO Max since it has launched in the US. With the HBO Max app, you will all the HBO Originals, movies, and series in one place. You can directly install the HBO Max app from the Play Store, or you can use the smartphone to cast the app. Like Netflix, HBO Max too has a lot of exciting movies lined up for 2021. Zack Snyder’s Justice League and Godzilla vs. Kong are some of the few.

If you want video content Marvel, Disney, and Pixar, Disney+ is the best streaming app for your Google TV. You can install the Disney Plus on Google TV right from the Play Store. As the Disney Plus is Chromecast-enabled, you can also cast the app from your smartphone or PC to your Google TV. Like Netflix has Teleparty, Disney Plus has GroupWatch. With the feature, you can share your screen with up to 7 friends and share emojis in real-time.

Hulu is one of the fewest apps that have both live TV and on-demand content. Based on your subscription, you will get different content. For Hulu and Hulu (No Ads) plan, you will get only the on-demand contents. On Hulu + Live TV and Hulu (No Ads) + Live TV, you will get both the live TV, movies, and series. Hulu app will be pre-installed on Google TV. If not, you can install the Hulu app from the Play Store. As Google TV is available in the US, Hulu is the best choice for your Live TV.

YouTube TV is the best streaming app for Google TV if you want DVR storage. The live TV platform offers unlimited DVR storage with 85+ live TV channels. The subscription costs $64.99 per month. Though YouTube TV is a bit costlier, you will get more features and add-ons pack. Like the Hulu app, the YouTube TV app is pre-installed on your Google TV. If you want, you can also cast the app from your smartphone.

Like Hulu, NOW TV also offers both live TV and on-demand content. NOW TV offers five different passes like Entertainment, Sky Cinema, Kids, Sky Sports, and hayu. Based on your preferences, you can choose the pass. If you want, you can also get customized passes. NOW TV subscription starts from $3.99 per month. As of now, NOW TV is not available on Google TV. You have to sideload NOW TV the app or cast the app from your smartphone to your Google TV.

Like Hotstar, fuboTV is a sports-based live TV streaming app. With the fuboTV app, you will get live matches from sports like NFL, NHL, NCAA, MLS, FIFA, and more. In addition to live TV, you can also get access to more than 10,000 hours of on-demand content. If you want, you can also record live TV shows with 30 hours of DVR storage. The subscription starts at $64.99 per month with a free trial for seven days. As of now, fuboTV is not available for Google TV. You have to sideload the app on your Google TV.

Guide: How to Stream Plex on Google TV.

Kodi is the best media player app for Google TV. By installing Kodi on Google TV, you can get to install thousands of streaming add-ons and skins. In Kodi, you can install add-ons from different categories like Videos, Music, Movies, Series, On-demand videos, and more. Popular add-ons like Exodus Redux are still available for Kodi. With that, you can stream live TV channels and on-demand content for free.

If you are a fan of offline streaming, VLC is the best app for Google TV. With the VLC app, you can video or audio files in any format. As the Chromecast with Google TV comes with 8GB of storage, you can store offline media files with ease. Other than offline files, you can also stream IPTV videos using the M3U URL. Unfortunately, VLC is not available on the Play Store. You have to sideload the app on your Google TV using the Downloader app.

Every device which has access to the internet connection needs a VPN. But, not all VPNs will protect your personal data. Only premium VPNs and freemium VPNs will protect the user data with utmost security. With ExpressVPN on Google TV, you can get access to 3000+ servers in 94 countries. All the ExpressVPN servers are customized into Lightway, OpenVPN UDP, OpenVPN TCP, L2TP/IPsec, IPsec, and IKEv2. You can choose the server based on your preferences.

These are the must-have apps on your Google TV. Streaming apps mentioned here are based on common preferences. Choose the app based on the subscription you are having. Other apps like ExpressVPN, Kodi, and VLC are essential apps on Google TV. Comment your favorite streaming app on your Google TV in the comments below.