How to Stream Money Heist on Google TV 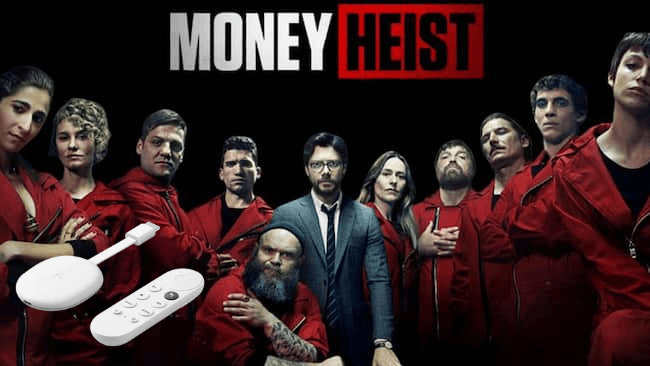 Money Heist, a Spanish heist crime drama TV series by Alex Pina. In Spanish, Money Heist menad La Casa de Papel. It is a heist-centric engaging drama that left the audience on the edge of their seats with its telenovela style of storytelling. The intriguing plot unfolds a new mystery with several twists that focus on serious social agendas of current times, but at the same time, it keeps the audience engrossed with its dramatic execution as well. As for now, Money Heist has 4 seasons. The next or the final season holds two five-episode volumes and will release on September 3 and December 3, 2021, on Netflix. The first two seasons of Money Heist got released on the Spanish network Antena 3 in 2017. Netflix acquired global its streaming rights in late 2017. So, you can watch Money Heist on Google TV with Netflix.

You will find 9 episodes on the first season that was released on 2 May 2017. The second season included 6 episodes and was released on 16 October 2017. The third and fourth seasons have 8 episodes and were released on 19 July 2019 and 3 April 2020 respectively. Netflix has three subscription plans Basic ($8.99), Standard (&13.99), Premium (17.99). Further, you can stream Money Heist on all three plans. Now, let look at the procedure to stream Money Heist on Google TV using Netflix.

Before going to the steps, purchase a subscription plan on Netflix.

1. Launch your Google TV and connect to the Wifi network.

2. Now, you can press the Netflix button on the Google TV remote to open it. Or you can search for the Netflix app from the home screen.

4. Then, search for the Money Heist series on the Netflix app.

5. Select and play the episode that you want to watch from Money Heist on Google TV.

Related: How to Watch Lucifer on Google TV

If you have the Netflix app on your smartphone, you can easily cast the app on your Google TV to watch Money Heist episodes. Otherwise, you can download it from the Google Play Store or App Store.

1. Make sure that you have connected your smartphone and Google TV to the same Wifi connection.

Related: How to Watch The Flash on Chromecast with Google TV

4. Then, select your Google TV name from the available devices.

6. Now, you can select and play the Money Heist episodes and stream them on your TV.

Money Heist will be a very interesting series to watch. If you have not yet watched, try to watch all the series and wait for the final season on September 3. You can try either of the methods to stream the same on your Chromecast with Google TVComment your queries below and let us resolve the issue.