How to Add and Watch NHL on Google TV 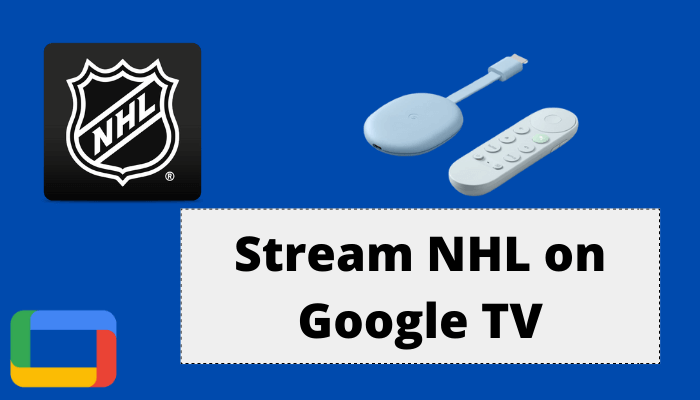 NHL is known as National Hockey League for Ice Hockey sport. The NHL consists of two conferences, namely Eastern and Western Conferences. Each conference has 16 teams with 2 divisions and thereby 32 teams in total participating in the league. It has an NHL app to stream live matches and highlights. The app provides the complete league schedule, live scores, and points table. It is compatible with Android TV, Roku, Amazon Fire TV, Google Chromecast, and many more. In addition, you can also stream NHL on Google TV.

NHL has teams from the United States (25) and Canada (7). It is one of the major sporting leagues in North America. The NHL app offers game replays and highlights for on-demand streaming. It also streams the national and Stanley Cup matches. The app provides plenty of customization to alter the app look into favorite team design, logo. You can choose your favorite team in the app for dedicated news and updates of the team in the NHL app.

The NHL app needs the NHL TV subscription to access the live matches. It costs $24.99 per month and $144.99 per season. You can also choose a favorite team subscription for $115.99 to watch all the matches of the team in a season.

How to Add NHL on Google TV

(1). Power on Chromecast with Google TV and connect to the internet connection.

(2). From the Google TV home screen, select the Apps menu available at the top.

(3). Scroll down to the App Categories and choose the Search for Apps.

(4). Search for the NHL app and choose the app from the suggestions.

(6). Select Open to open the NHL app and log in to your NHL subscription.

(7). Browse for the live matches on the app and enjoy the live streaming on Google TV.

The cast support in the NHL app helps in streaming the live matches on Chromecast compatible TV from your smartphone. You will need a common internet connection between the smartphone and the Google TV for casting.

(1). Download the NHL app from the Google Play Store or App Store on the Android or iOS smartphone, respectively.

(2). Launch the NHL app on your smartphone and tap Sign In.

(4). Navigate to press the Cast icon from the top and choose your Google TV from the suggestions.

(5). Connect to Google TV and watch the live NHL match on Google TV.

NHL app is the best streaming app to watch live Ice Hockey matches. It also has the classic match replays to stream, and it sends notifications of favorite team upcoming matches. You can also watch the NHL matches on Google TV using streaming services, like fuboTV, YouTube TV, Hulu, many more. In case of any problem, you shall specify in the comments section below.