How to Stream Olympics on Chromecast with Google TV 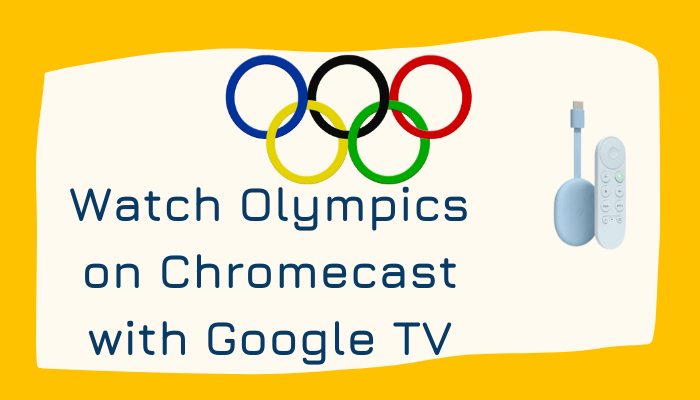 The 2020 Summer Olympics or Tokyo Olympics has started in Tokyo, Japan. It is a 17-day sports event that happens between 23rd July and 8th August. Tokyo hosts the Summer Olympics for the second time after the first event held on 1964. It is officially the Games of the XXXII Olympiad, and it has 33 venues for conducting the Olympics games. The Olympics is the culmination of all major sports, and it includes 339 events in 33 sports. The Coronavirus pandemic has made the entire event to be broadcasted via different streaming service providers across the world. However, NBC stream the entire Olympics events in the United States. You can live stream the Olympics on the NBC Sports app on Google TV.

The NBC Sports app can be installed on Google TV for free. It also streams the opening and closing ceremonies of the Tokyo Olympics. The NBC Sports app has live as well as on-demand streaming of the games. A TV Provider subscription is necessary to log in to the app and stream the games. In addition to NBC, the famous TV Providers that let you stream Tokyo Olympics are fuboTV, DirecTV, Dish, Cox, YouTube TV, AT&T TV, Optimum, more.

How to Watch Olympics on Chromecast with Google TV

(1). Plug the Chromecast with Google TV to the HDMI port of the TV.

(2). Launch the Google TV and connect it to a WIFI network. Click the Apps tab on the home screen.

(3). Go to the Apps Categories and tap the Search for Apps option.

(4). Look for the NBC Sports app and choose the app from the options.

(7). When you get the Activation Code for the app, visit the NBC Sports activation website on the PC.

(8). Choose the Streaming Device and type the Activation Code.

(10). Choose the Olympic games and stream them on Google TV.

Related: How to Add and Stream Live TV with CBS on Google TV

You could also cast the NBC Sports app from your smartphone to Google TV.

(1). Make sure you connect your smartphone and the Google TV to the same Wi-Fi network.

(2). Install the NBC Sports app on the Android device from Google Play Store or on iPhone from the App Store.

(3). Open the NBC Sports app on the smartphone and tap Sign In.

(5). Choose the Chromecast with Google TV to connect and watch the Olympics live streaming.

The Olympics will feature on For You tab on Google TV, and you can access them easily from the home screen. The streaming services like YouTube TV, fuboTV, Hulu, Sling TV offer NBC Sports TV channels, and you can use any of them to live stream of Olympics. You can watch the Olympics on BBC Sports in the UK, Eurosports in Europe, Japan Consortium in Japan, SonyLiv in India. If you have got any queries with the above guide, kindly mention it in the comments section below.