Chromecast with Google TV VS Roku: What to Buy 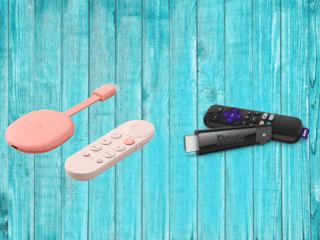 The price hike of cable TV has been a solid reason for the entertainment freaks to switch over to streaming devices. Choosing between different media streaming services isn’t easy, as all of them seem to be feature-rich options. Roku and Chromecast with Google TV are outstanding streaming devices and are a tough competition to each other. Chromecast with Google TV is an advanced model that combines the features of a streaming device and Chromecast. It runs on the Android TV operating system and allows you to access popular sports channels like ESPN, NBC, and more.

Roku is an outstanding media streaming player that includes a robust collection of apps and supports streaming content from different services. Some channels on Roku give you content with a paid subscription, while others are free. In this section, we will discuss the contrasting features of Chromecast with Google TV vs Roku. At the end of the session, you will be able to pick the best streaming device.

The design of Chromecast with Google TV is totally modified compared to the older Chromecast devices. The latest Google TV dongle is oval in shape with a smooth surface. The Google logo is printed on the center of the device. It is equipped with a USB port and a short HDMI cable. The device comes in multiple colors such as Snow, Sky, and Sunrise.

Roku Streaming Stick 4K is a short rectangle bar that looks similar to a normal USB drive. This device is available only in black color. The Roku logo is printed on the center of the device. The Roku streaming stick comes attached with an HDMI port connector. This device also has a micro USB port on the left side. It is made of hard plastic and weighs approximately 0.9 ounces.

Result: The designs and structure of both the devices are excellent. Roku is less heavier and compactable compared to Google TV.

The Roku Streaming Stick 4K has an updated and well-organized Roku Channel Store with more than 30,466 apps covering different categories. Furthermore, it comes with the AirPlay support making it useful for Apple users. By enabling AirPlay, you can cast any content from your iOS device to Roku. Roku also offers thousands of movies, TV shows, and Live TV channels for free. But, you will be interrupted by 30 seconds or 1-minute ads while streaming the content.

Chromecast with Google TV comes with a well-updated Play Store of around 6500 apps. It includes popular streaming apps from all over the world. Furthermore, you can cast apps from Android and iOS devices. You can also sideload apps on Google TV. By sideloading, you can install the apps like Vudu, Eurosport Player, and more on Google TV. Like Roku, Google TV also offers more than 300+ Live TV channels for free. Along with Live TV channels, you can stream popular movies and TV shows for free with ads.

One of the best things about Roku Streaming Stick 4K is its interface. The interface is simple with no apps or content recommendations. In Roku, the tabs are displayed on the left side. On the right side, you will find the installed apps on your Roku device. Under the Streaming Channels, you can the apps arranged in different categories. You can also search for your desired apps using the Search option.

Like Roku, Google TV also has a user-friendly interface. The apps are arranged and organized in an appealing way. In Google TV, you can create personalized profiles for every single member of your family. Whereas, Roku allows you to add and manage only a single account. In addition, Google TV allows you to customize the home screen based on your preference.

Result: The interface of both the devices are simple and easy to navigate. But, Chromecast with Google TV is equipped with more customization options compared to Roku.

Chromecast with Google TV has a remote that has keys for controlling volume and channels. The buttons are properly designed and well responding. Furthermore, it has a mic to summon the Google Assistant. And it has buttons for YouTube and Netflix.

At the same time, Roku Streaming Stick 4K has a very-user friendly remote. It has all the necessary control functions and buttons to access popular streaming services like Hulu, Disney+, Apple TV+, and Netflix. In addition to this, Roku has an instant replay button.

Result: Compared to Google TV, Roku has more buttons for streaming apps. It also has an replay button that allows you to rewind the seconds of the video.

Result: The streaming quality of both the devices are same.

Result: The price of both the devices are equal. But, the Roku Streaming Stick 4K+ is bit costly than Google TV.

Check out our comparison guide of Google TV with different streaming media players.

Roku seems to hold lots of apps when compared to Google TV. But, you can install and access only the apps from the Roku Channel Store. However, Google TV allows you to download apps from third-party sources. Both of them seems to be a close rival in most factors. Each individual has different preferences when it comes to getting entertained. But, Chromecast with Google TV is the best device for both gaming and streaming.

1. Is Chromecast with Google TV better than Roku?

Both Chromecast with Google TV and Roku are leading streaming devices in the industry. Both the devices support many apps and have lots of attractive features. But, when you compare performance, Google TV slightly performs better than Roku.

2. How to get Stadia on Google TV?

You can directly install the Stadia app from the Play Store on Google TV.

3. How much does Roku Streaming Stick 4K+ costs?