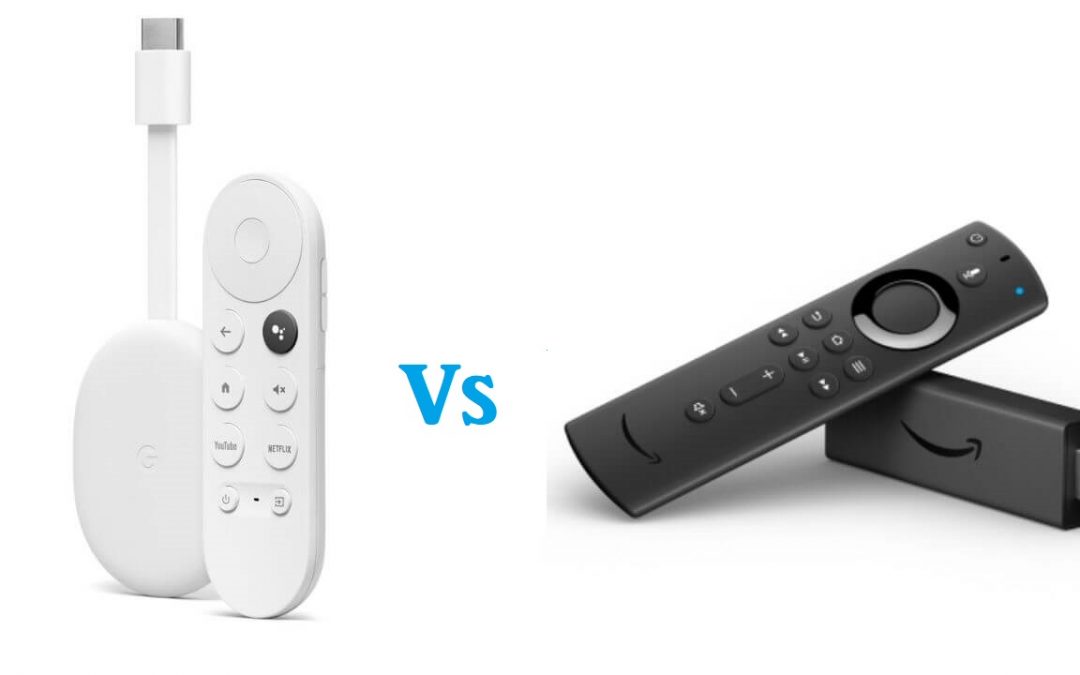 Chromecast with Google TV is ovular in shape and has an extended USB cable at one end. You need to connect the USB cable to the HDMI port of your TV. It has a USB-C port on the other end. You need to connect the Google TV to the wall outlet using a USB power cable and adapter. This device is available in three solid colors – Snow, Sky, and Sunrise. This device weighs 62 grams (approx) and it is printed with the G logo at the center.

Note: To know about the installation and setup, check out our Chromecast with Google TV setup guide.

Result: The structure and design of both the devices are attractive. But, Google TV is bigger and slighlty heavier than Fire TV Stick.

Google TV is a small remote with curved front and back ends. The remote has basic buttons like play/pause, Home, Mute, Power Off, and Back. You will also find dedicated buttons for Netflix and YouTube. In addition, it has a Google Assistant button. You can also use smartphone remote apps to control and navigate on Google TV.

Fire TV Stick 4K offers a rectangular remote that has more buttons compared to Google TV. The remote has an Alexa button at the top and at the bottom, you can find buttons for Amazon Music, Prime Video, and Netflix. And you will find basic playback control buttons to perform functions like play/pause, rewind, and fast-forward.

Result: When compared to Fire TV Stick, Google TV remote is bit handy and allows you to perform functions easily.

Google TV has a simple and intuitive interface. The home screen consists of different tabs like For You, Movies, Shows, Apps, Library, and Settings. You shall access all of your favorite apps like HBO Max, Peacock TV, etc from the Play Store on Google TV. The Play Store on Google TV gives you access to more than 6000 apps. You can also jailbreak Google TV and can install apps from third-party sources. Google TV recommends several apps and video content on the home screen. You can stop the recommendations by enabling the option Apps Only Mode.

Fire TV Stick 4K also has a highly appealing interface. You will find only four tabs in the middle – Profile icon, Home, Find, Live, App icon, and Settings icon. Above the tabs, you can see the thumbnail of a movie or TV show. Below the tabs, you can see all the popular movies and TV shows on Prime Video. To search for an app, navigate to the Find tab. Here, click the Search menu and search for your desired apps. Like Google TV, Fire TV Stick 4K also has plenty of apps in Amazon App Store. In addition, you can also download apps from third-party sources.

Result: Both Chromecast with Google TV and Fire TV Stick 4K have a similar interface and apps.

The Fire TV Stick has better parental control settings. You can restrict purchases, and app usage. Similarly, Google TV allows you to hide apps, block content, limit screen time, and more. You can enable parental controls on Google TV in the Settings app. At the same time on Chromecast with Google TV, you need to switch to a new account with less age to set parental controls.

Both Fire Stick 4K and Chromecast with Google TV are affordable media streaming players. Both the devices cost $49.99. Amazon offers discounts for customers frequently. Similarly, you will get 10$ discount for Google TV if you buy the device from the Google Store.

Result: Amazon offers several price offers for its products on festive seasons. So, you can get more discounts on Fire TV Stick 4K compared to Google TV.

You can also refer to our comparison guide of Google TV with other streaming devices.

Both Chromecast with Google TV and Fire TV Stick 4K have similar features and apps. Even the price of both devices is the same. It is difficult for us to choose the best streaming device. Both the devices rely on the same place. So, choose the device which satisfies your needs. If you live in a Google ecosystem, then Chromecast with Google TV is the best one to choose.