Google TV VS Nexus Player: Which One is Best to Buy? 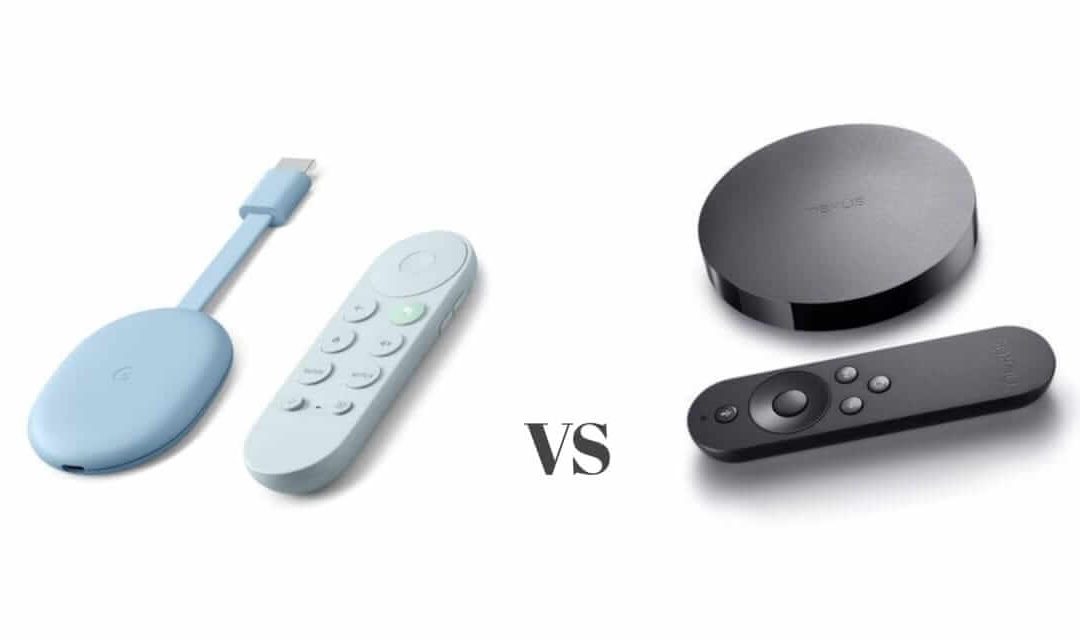 Chromecast with Google TV is an ovular shape device with a short HDMI cable attached at one end. It has a USB-C port on the other end. The device is printed with the Google TV logo at the center. And this device hangs like a pebble when connected to your TV. Google TV weighs 2.2 oz and is available in three colors namely Snow, Sky, and Sunrise.

Nexus Player is a circular disc-shaped device that is available only in black color. This device is almost similar to a Hockey puck. It has a power port, HDMI port, and USB port. It also has a large Bluetooth button to pair the remote. This device weighs 8.3 oz and you need export support like a table or stand to place the device.

Result: The design of Nexus Player is highly attractive compared to Chromecast with Google TV. But, this device weighs more than Google TV and it is available only in one color. When you compare design and structure, both rely on the same place.

Chromecast with Google TV is packed with a voice remote that has basic buttons to control playback and a button to trigger Google Assistant. You can also find buttons for streaming apps like Netflix and YouTube. In the Chromecast voice remote, the Power button is located at the bottom and the D-pad at the top.

The Nexus Player remote is simple and looks similar to the Fire TV Stick remote. Like Firestick, it also has the Voice button at the top. It is equipped with only five buttons such as Home, Back, Play/Pause, Voice, and D-pad buttons. The remote is printed with the Nexus logo at the bottom and it has an LED light at the top.

Chromecast with Google TV vs Nexus Player: Interface and Apps

The UI of Google TV is clean and neat, so even if you are a beginner, you won’t have any difficulties navigating it. Further, you can install all your favorite apps from the Play Store on Google TV. You can also jailbreak Google TV to install third-party apps and launchers. By jailbreaking, you can install popular fitness apps like Peloton, Zwift, FitOn, etc. In addition, Google TV also offers ad-supported movies, TV shows, and Live TV Channels for free. Google TV consists of several tabs like search, For You, Live TV, Movies, Shows, Apps, and Library on the home screen. You can also customize Ambient Mode and interface on Google TV.

Nexus Player has a very simple interface compared to Google TV. On the home screen, you will find popular movies and TV shows tile. The apps are arranged in a single row below the recommendations. Below the apps, you can find the Settings icon. Like Google, you can search for apps by using Google Assistant. Nexus Player consists of only 70 apps. However, you can sideload the apps using ES File Explorer. Similarly, you can also install apps on Google TV using ES File Explorer.

Result: If you compare interface and apps, Google TV is the winner. Because, Google TV has more apps and customization options than Nexus Player.

Google TV has 8GB of data storage space and 2 GB of memory. Out of 8 GB, you can access only 5 GB. On Chromecast with Google TV, you can stream the media content in 4K HDR quality and it supports Dolby Vision, HDR10, and HDR10+. Further, it supports audio formats like Dolby Atmos, Dolby Digital, and Dolby Digital Plus formats. Google TV is powered by a Quad-core Amlogic processor and runs on the Android 10 operating system. So, the performance of the device will be excellent.

The Nexus Player is powered by a 64-bit 1.8GHz quad-core Intel Atom Silvermont processor along with the imagination PowerVR series 6 Graphics (2D/3D) Engine. So, you can play lightweight games without any issues. Nexus Player only supports videos up to 1080p quality. And it includes 8GB of in-built storage and 1 GB of RAM. Overall, the performance of Nexus Player will be good.

Result: When comparing with the Google TV, the performance of Nexus Player is below the average level. Obviously, Google TV is the winner.

Nexus Player costs around $99. This device has excellent gaming support. If you want to buy a Nexus Player gamepad, it costs $40. So, the total price would be $139, which is extremely high compared to top streaming devices like Firestick, Roku, etc. The price of Chromecast with Google TV is just $49. If you buy the device from the official Google Store, you will get a $10 discount for the device.

Result: The price of Chromecast with Google TV is less compared to Nexus Player. So, Google TV is the affordable device to buy.

Comparison of Google TV with Other Devices

You can also refer to our comparison guide of Google TV with different streaming devices.

1. Which is better Google TV or Nexus Player?

2. What replaced the Nexus player?

3. Can you still use Nexus player?

Yes. But you will not get any product support from Google.