Chromecast with Google TV vs Apple TV | What to Buy 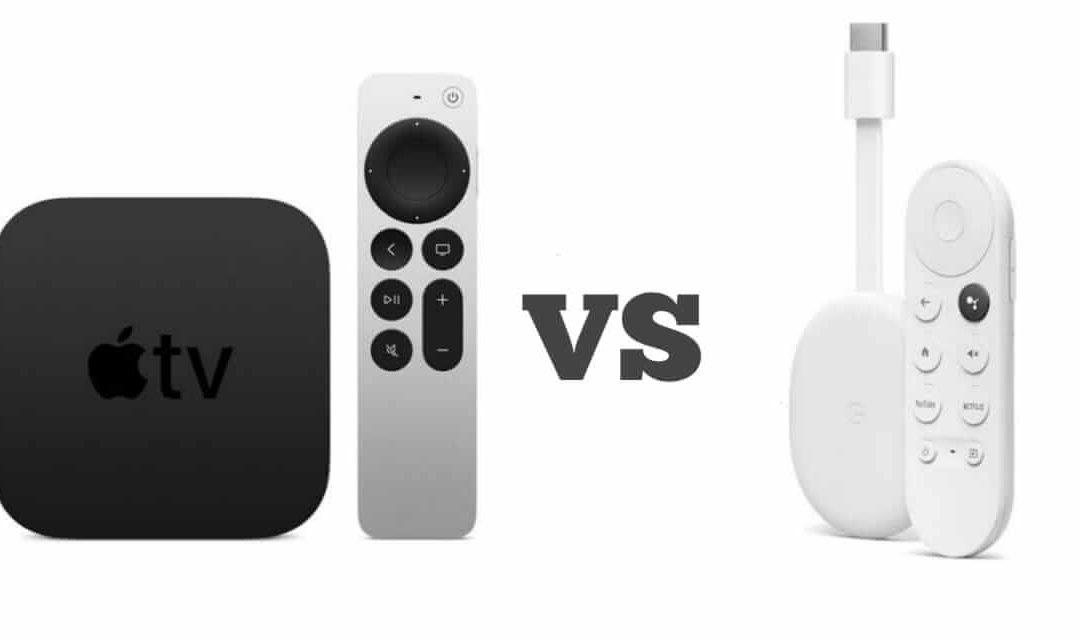 Apple TV is a small sleeky black box with round edges. It measures 3.9 x 3.9 x 1.4 inches and consists of a power port, an HDMI port, and an Ethernet port at the back. Since it is small, it doesn’t occupy much space or affect the appearance of your place. The Apple TV 4K is equipped with an A12 Bionic processor. So, you will not face any issues while streaming videos. The Apple TV 4K comes with a Lightning to USB cable, an HDMI cable, and a Siri remote. You can connect the Apple TV 4K to any TV by using the HDMI cable.

Result: Apple TV is a bit heavier compared to Chromecast with Google TV. Apart from the weight, the design and structure of both devices are highly appealing.

Apple TV lets you stream 4K HDR video up to 60 fps. In addition, it also supports HDR10, Dolby Vision, and the HDR high frame rate tech. And it also has the support for Dolby Atmos 3D audio tech. And you can use sensors within your iPhone to adjust the color balance on the TV. You can also cast from iOS and Mac using the Airplay 2. Apple TV supports various audio formats such as HE-AAC, MP3, MP3 VBR, Apple Lossless, FLAC, AIFF, WAV, Dolby, and more.

Chromecast with Google TV also supports 4K HDR and supports Dolby Vision, HDR10, and HDR10+ support. And it even supports Dolby Atmos. Like Apple TV, you can also cast content on Google TV from a smartphone or PC. And both streaming devices support the new HDMI 2.1 tech.

Result: If you compare streaming quality, both the devices allows you to stream the video content in high resolution quality.

The remote of Chromecast with Google TV is similar to the Apple TV remote. 2 AAA batteries power the Google TV remote, and it comes with a circular D-pad on the top. You also have another eight buttons including Back, Input, Home, Mute, Power, and dedicated buttons for Netflix, YouTube, and Google Assistant. Further, the remote also supports Bluetooth and IR. If the Chromecast voice remote is not working, you can use the Android TV Remote app to control Google TV.

Result: If you are new to Apple TV, navigating using the touchpad might be difficult. But, Chromecast comes with a D-pad that allows you to perform navigation easier. In addition, you will find YouTube and Netflix buttons on Chromecast voice remote. Whereas, Siri remote does not have any dedicated buttons for apps. Finally, Chromecast Voice remote has more advantages than Siri remote.

Apple TV has plenty of streaming apps in the App Store. The App Store comprises more than 15000 apps in different categories. It consists of streaming apps such as Disney+, Paramount Plus, Food Network, and more. You can install the apps from App Store by searching or by using the Siri remote. If you can’t find any of your favorite apps in App Store, you can screen mirror from your iPhone/iPad using Airplay. In addition, You can even play games on tvOS.

Chromecast with Google TV also supports many streaming apps like Prime Video, Hulu, etc. You can directly download the apps from the Play Store on Google TV. If an app is not available for Google TV, you can either cast the app from your Smartphone or you can sideload the app using Downloader. The user-friendly interface of Google TV allows you to navigate easily. Further, you can enable Apps Only Mode to remove all the app recommendations on the interface.

Apple TV is available in two variants. The first one is the 32GB model, which costs $179, and the second one is the 64GB model, which costs $199. So Apple TV is a little expensive. If you have your own older Apple TV models, you should buy a Siri remote that costs around $59. Whereas Chromecast with Google TV (8 GB) just costs $50, and it includes everything in the price.

Result: Though both the devices share similar features, the price of the Apple TV is quite expensive compared to Google TV. So if you compare prices, Google TV wins.

Comparison of Google TV with Other Devices

You can also refer to our comparison guide of Google TV with different streaming devices.

After going through every aspect of the Apple TV and Google TV, Chromecast Google TV wins the battle. Because the costs of Google TV device is cheaper and affordable. The only drawback of Google TV is its storage space. Other than that, it is the best device to buy. But, If you are concerned about the storage space, go for Apple TV.

1. Which is the best streaming device – Google TV or Apple TV?

Both streaming devices have the same features and functionalities. But they differ in the price and storage. Google TV has less storage than Apple TV. If you don’t want more storage, then Google TV is the best device at a low price.

3. Is Apple TV worth the cost?

Yes. It is definitely worth the cost. Apple TV 4K is one of the best streaming boxes that allows you to watch the media content in a 4K quality.